Light Saber Training
Bring the power of the force to you! Our Authentic - voice amplified-breathing  Dark Master  will meet & greet with your birthday child and his/her friends, take photos, and then it's off to Galactic Knight  Light Saber lessons! Comes with official Jedi certificate for the birthday child!

​Jedi Mind Tricks
Thereafter, our Dark Master will teach the birthday child and all the little Padawans the ancient art of Jedi Mind Tricks. Take pics; capture their amazement as the kids learn the Force Push and discover how to move an object with only the power of their mind!

Cake Ceremony
Our Dark Master will lead all the little Jedi masters in the happy birthday song, and bestow a Jedi training completion certificate to the birthday child before heading back to his Imperial City.

​Add a male or female Jedi and watch the epic battle between the Light and the Dark side as the Dark Master duels the Jedi master. The force may be too strong for the Jedi to handle, so he/she may call upon the aid of the birthday child and his/her friends to help subdue the dark Lord.

​Thematic music (including the imperial march), Fog machine, 20 Light Sabers, 20 Robes (on loan for training only), 20 completion of training certificates to keep.

​Our Galactic Knight travels all the way from his home world and transports directly to your event! As he meets and greets the young Padawans, the insidious Dark Master makes his appearance along to the Imperial March soundtrack.

Sit back and take pics as the Dark Master and a Galactic Knight duel each other in a light saber battle. Then, the two Jedi's will supply each child with a robe and light sabers and train them the ancient art of Jedi training.

Upon completion, each child guest will receive an official Jedi training completion certificate in a ceremony setting. Next, the Dark Master and Galactic Knight will teach the younglings how to accomplish the Force Push as well as move an object with the power of their minds.

​After Jedi Mind Tricks, the two Jedi's lead the birthday child in the cake ceremony as they sing happy birthday. After that, It's picture time!

(package designed for 20 guest children. Additional high quality certificates may be purchased for $1 each)

​Imagine the Galactic Princess or Galactic Knight running from the evil Galactic Empire only to end up right in your birthday child's living room or party area - which is also the Death Star! Seeking to find the blue prints to the Death Star, the Galactic Princess enlists the aid of the birthday child and his/her friends to use their Jedi powers to unlock the console containing the blue prints. However, unbeknownst to the Princess, The Dark Master makes his grand entrance and tries to subdue the Princess and the birthday children from taking the plans. This is where the powers of the Light and Dark Side meet in an epic battle! Who will win?

​Also included in this package is Jedi Mind Tricks, Photo Ops, Birthday Session and Gift for the birthday child.

(Package designed for over 15 guest children)

Fog Machine with Imperial March Entrance Music $15 - Give the Dark Master the grand entrance he deserves by having him make his grand entrance with ominous smoke coming through the doorway. (we use a fast dissipating cryo fog jet that evaporates in seconds).

We set up a wireless blue tooth speaker wherever the Dark Master makes his grand entrance with the Imperial March. Thereafter, we continuously play themed Star Wars music throughout the hour. (The Galactic Training Academy Package music is included.)

​8' x 8' Galactic Backdrop $35 - ​Great for picture time! Take photos of the Dark Master and your birthday child in front of a high quality (Jersey Cloth) Death Star Hallway backdrop. Comes with assistant, tripod stands. We set up and break down!)​

​Jedi Face Painter $100 / 1st hour & $80 / 2nd hour -​Dressed up in Jedi garb, our professional face painter can design Various Star Wars designs that will make any child happy and whistling like R2-D2. (2 hour minimum required if there are 10 guest children and over.)

​Jedi Balloon Twister $100 / 1st hour  & $80 / 2nd hour -Trained in the Jedi Arts of balloon sculpting, Our top balloon twister can create cool Star Wars balloons/Light Sabers for the younglings to enjoy. (2 hour minimum required if there are 10 guest children and over.)​

"Julio and his team are wonderful!! We had a Darth Vader birthday party for my son complete with Jedi Training and it was a blast. He made a grand entrance with music and a fog machine. We had about 22 kids participating and everyone had a great time." -Shayna B

"Thank you Julio for making my sons bday a blast!  Darth Vader being there completed my son's birthday as well as the guests who travelled from different areas." -Corina C 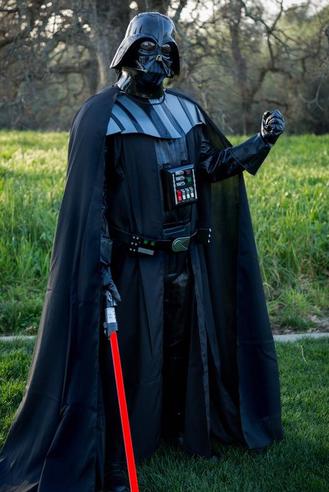 "Our Dark Master is one of a kind; movie quality costume with lights; equipped with a voice amplifier in his helmet. Our Character actually speaks and interacts with your birthday child and guests - Heavy  breathing included."